I knew a triathlon consisted of a swim, bike, run but my knowledge of it stopped there. 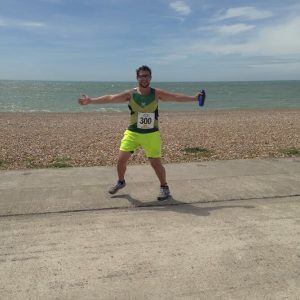 The inaugural Brighton and Hove Triathlon was being held in September 2016 and I decided to take part but had to do some research first.

I soon discovered there was a range of distances in the triathlon world:

I liked the sound of completing an Olympic distance, to be able to achieve something that an Olympian could do, although not as quickly, but I had just recently finished marathon, albeit slowly and in pain by the end.  Nevertheless, I felt invincible and that I could do anything I put my mind to….apart from doing an Ironman that just sounded crazy! Doing a 42km run (a full marathon) after doing 180km on a bike (a London to Brighton and then back to London) all preceded by a swim, no that sounded too much.

I signed up for the Olympic Distance and had 4 months to prepare.  As this would be my first attempt at doing a triathlon, I thought it best to do a practice one somewhere outside of Brighton, I wouldn’t want to embarrass myself in my hometown. I found a sprint distance event in Seaford taking place a few months before the inaugural Brighton Tri event. I bought a cheap second hand wetsuit as I read it would help with the swim. I tried it on when it arrived and, apart from looking/feeling like a twit in it, it also felt very restrictive and decided not to use it come race day. I didn’t own a bike, in fact I hadn’t ridden one since a kid but they say you never forget. Luckily I managed to borrow a mountain bike the day before the race. Just to be on the safe side I bought a cheap pair of “Tri” shorts, which are like cycling shorts but there is less padding so you can swim and run in them but the thought of running in lycra just felt too embarrassing, so when it came to it I planned to put some running shorts over them for the run itself

On race day I got my bike and run gear ready in “transition” area. There was a really nice vibe and buzz about the area, different to that of the marathon I did recently.  I chatted with those around me and then headed over to the swim start.  I lined up by the waters edge. Everyone around was me cladded in black rubbery neoprene. I was the only one there in wearing just Tri-shorts….I felt like a right twit, and a cold one at that! The sea swim went ok, I wasn’t last out, which was a relief. I ran over to the bike and mashed the pedals for 20km. I then headed out for the 5km run, all the time thinking “I did a marathon a couple of months ago…this will be a walk in the park” – I couldn’t have been more wrong. The 5km run almost broke me, it felt harder than the marathon!  My legs felt weird after the cycling and weren’t functioning how they were meant to. My legs didn’t feel like they belonged to me and was reduced to walking parts of it. Maybe doing a triathlon wasn’t a good idea after all. All the doubt, fear and pain soon disappeared after I crossed the finish line. I had just completed a triathlon; a sport that I thought was for super elite athletes only.  I once again felt that elation, and rush of euphoria and adrenaline as I had after finishing the marathon a couple of months prior.  However, this time it was different.  The whole event felt more inclusive, it felt like a mini family, there were smiles beaming all around me. In a few months’ time I would have to do it all over again but double the distance, strangely I was looking forward to it and to hopefully to bumping into some of the other competitors that I had met in Seaford that day.

2016 was just the start of my triathlon adventure and, unbeknownst to me at the time, my Ironman journey