David – From couch potato to Ironman 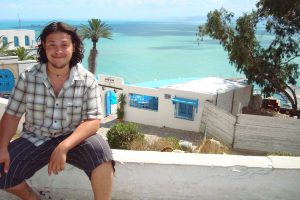 I used to suffer with bouts of depression, ongoing mental and physical lethargy. A lot of weight was due to the depression itself and medication I was on. I ate a lot junk food, as I didn’t have the motivation to cook for myself. I also drank too much alcohol and smoked too many cigarettes. I didn’t like the direction my life was heading.

I was not into sports, or fitness, or health. I didn’t even think the words “fun” and “run” should be in the same sentence.  My dad, after two years diagnosed with pancreatic cancer, died in 2014. I felt mentally, and emotionally, rough. So I decided to do something drastic…to run a marathon, and raise money for Pancreatic Cancer UK. Sometimes you have be to at your worst to figure out how to be at your best

I signed up for the Brighton Marathon.  I had about 8 months to train, which I thought was enough time to get from zero to 26.2 miles. I didn’t like the idea of having to train through the winter months though.

I had seen groups of runners going round Hove Park every Saturday morning about 9am.  I found out this was called Park Run, and was a 5km run round the park.  Too embarrassed to join these people at the crazy hour of 9am on a Saturday morning, I decided to run it on my own. My first training run (jog) was one lap of Hove Park. It was excruciating and by the end I was bent over wheezing, reaching for my asthma inhaler. I was red in the face, drenched in sweat and couldn’t barely walk. But I forgave myself because I had just ran (jogged) one lap of the park like the Park Runners and I knew 5k was a long way. Then I looked at Strava and saw it was only 2k, just over one mile. Suddenly the idea of doing 26.2 miles seemed very daunting. Deflated I got a taxi home and quickly signed up for a half marathon that was happening in two months’ time.

On the day I the half marathon I was extremely nervous.  I had only had 8 weeks of training, half of which I was injured. Reluctantly, and with much regret for signing up, I kept plodding on. But I progressed. That first half marathon took 2

hours 45 mins, I was in a lot of pain, but the endorphins and elation of crossing finish line made me feel like superman. The Brighton Marathon six months later took me 5 hours 36 mins and I was a broken man. The last five miles took about an hour in themselves. At the end I had blisters on my toes that looked like big red cherries but I didn’t care.  I had ran (jogged) a marathon, achieved the unbelievable, and raised over £1,000 for Pancreatic Cancer UK in the process.

I assumed that would be the end of my sporting attempts for life, but the truth is that being able to “comfortably” run (jog) for 5, 10, 20k or even 40km was pretty liberating …and I did actually *enjoy* running (maybe not the last 6 miles of the marathon though…). And the feeling of crossing the finish line was out of this world. A mix of elation, gratitude, relief and sadness.

So… having done the marathon, I wanted a new challenge, I wanted to feel that buzz again from racing and that feeling of accomplishment when crossing the finish. I didn’t fancy doing another marathon so I came across triathlon. THIS was my new beginning.