It’s hard work riding on the front of a group.  Protection from the wind gives a power saving of  15-20% though for a following rider and so it makes sense to ride in a group and take a turn on the front.

Once you’ve mastered the skills of riding on a wheel, you can ride hard then drop back and recover while someone else takes a turn.  Riding this way allows you to develop your leg speed and endurance without the muscle damage associated with riding hard for long distances on your own.

Riding “through and off” is really for groups of cyclists who trust each other and know the roads.  You do see a bit of this on sportives, however, in this situation, you have no idea what kind of skill set you are dealing with and so I would not get involved unless you are clearly within a well drilled group.

Anyway – here it is:

Riding close  to a wheel can be daunting at first but in order to achieve the necessary power saving, you need to be inside the slipstream of the rider ahead.  Initially, keep a gap of around a metre but as you gain confidence you will be able to ride closer.  Start in a small group, there will be less worry about moving to the back, and take longer turns on the front in order to reduce movement.

Your front wheel should never overlap the wheel you are following and you should avoid any sudden braking or movement to the side.  Clear communication between the members of the group is essential. Riding a constant speed is important since any rapid changes in pace will be reflected down the group with riders at the back having to brake or sprint in order to keep on the wheel.  Clearly, when descending, you should increase the gap.

When you have done your turn at the front, move calmly to the right after checking it is safe to do so and allow the group to pass on your left until you have reached the back.  If you are the next person taking a turn, avoid the temptation to increase speed otherwise you will mess everyone up.  You will need to work harder into the wind however, and some riders over compensate resulting in a quickening of the pace.

“On the rivet” An old term meaning riding at maximum effort

“Half wheeling” The quickest way to lose friends in a group.  You ride just half a wheel ahead of your mate, he/she then catches up and you move forward again, disrupting the rhythm of the ride.

“Sitting up” Means what it says – when you’ve had enough and cannot continue at that pace, you sit up and this tells following riders that you are slowing and ready to move off.

“Getting dropped” The pace is too high and you cannot maintain your pace within the group and begin to drop off the back.  We don’t allow this to happen, especially with new riders.

“Car up” Usually shouted from the front of the group to warn of oncoming traffic.

“Car back” Shouted from the back to warn of vehicles about to overtake.

“Single out” Warning to riders to get into single file in order to allow traffic to pass.

Riding on roads with continuous traffic It’s nice to ride side by side and some cyclists feel that it is OK to do this all the time regardless of traffic conditions. It can be argued that we have the right to do so and that car drivers need to slow down and wait their turn to overtake.

However, consider the result of doing this on a busy road on a Sunday morning.  The result is a line of frustrated motorists and often ends up with some kind of altercation.  Please be mindful of this, it is quite frustrating if a group of cyclists at the rear of a bunch “single out”  allowing a driver to overtake only to see your mates ahead ignoring shouts of “car back”.  The car overtakes the first few cyclists and then sits behind those still riding two abreast with the motorist spitting blood.

If we are a large group of say 10 or more, then it may be wise to split up into smaller groups when riding on a long busy road, allowing motorists to safely overtake a small group rather than having to accelerate and scream past a larger one.

Lastly, if you are tiring, let others know and back off from the wheel in front.  Your reactions will slow and you are more in danger of making sudden late corrections.

Communicating – some signals It is essential to use these signals when riding together – that way we keep each other safe.

Signal for potholes Riding into a pothole is becoming a more frequent hazard.  Potholes can cause expensive damage to wheels & tyres and can cause nasty accidents. 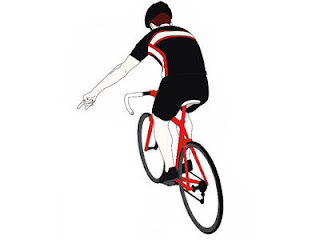 Signal to come through It can get very comfy riding on a wheel.  If the rider in front is doing this then they really want you to take a turn! 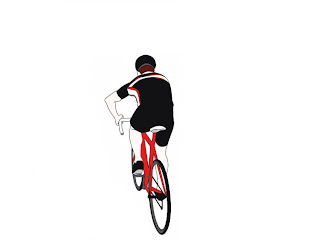 Slowing down Whether approaching a junction, traffic lights, pedestrians, horses etc. A shouted warning and/or an angled outstretched arm will let others know of the change of pace. 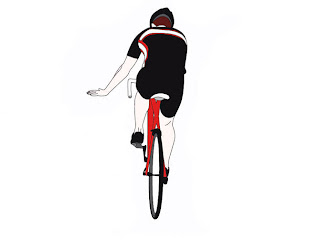 Dodgy road surface Same as above but move your hand as if dusting an invisible surface. Deviating Parked cars, road furniture, slower road users etc may mean moving out (or in).  Gesture like this. 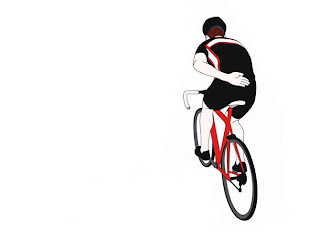 With thanks to Bike Radar for the images.